Rising prices of pulses and meat have impacted the poor significantly. Waste-pickers with little income are left to fend themselves against the high costs of food. Even within waste-pickers, the migrant community members (from other states) are worst off. They have no formal linkage with public distribution system- thus, nothing nutritious and filling left in their diet. Many of the children of migrant waste-pickers are identified with malnutrition and protein deficiency.

Seven years back, an experiment of growing oyster mushrooms to counter malnutrition and protein deficiency was done in Amravati district of Maharashtra. It didn’t succeed for many different reasons including the absence of relevant subsidies etc. The idea of countering malnutrition and protein deficiency by oyster mushroom cultivation stayed in the head of Nalini Shekar, founder of Hasiru Dala. She wanted to do something around it for a long time. 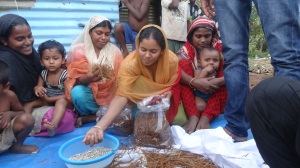 Oyster mushroom cultivation is very easy to do. You don’t need much of physical space. Chaffed paddy straw, an empty packet – cover: size 18 inches, and mushroom seeds is all what one needs. Chaffed paddy straw is easily available and is the leftover following harvest. Straws have to be chopped in three inch pieces, after that the straws have to be boiled for one hour. Once boiled, the water is to be drained off. Then straws are spread on a clean dry cloth and left for drying under shade for two hours. The straws will be still moist.

A layer of seeds is added in the packet. After that an inch of moist straws is placed. It is repeated for four to five times in the same packet. The packet should be tightly packed with very little air in it. The packet should have ten- fifteen holes. It can be kept in shade, anywhere in the house, at room temperature for twenty days. On twentieth or twenty first day, spores will start coming out. Little water is to be sprinkled twice daily after the twentieth day. Mushrooms will be ready to harvest within couple of days of sprinkling water. Cook those mushrooms and have it for countering malnutrition and protein deficiency.

The suggestion of growing mushrooms was shared with wastepickers. Many of them are excited about it. The first training was conducted in horticulture department. Very few came as the location was very far and one had to take time out of work to go there. It was decided to host the training sessions in the vicinity of their residence. Last week a training programme for the cultivation of mushrooms was conducted in Akshaya Nagara and Kalkere Cross, Bengaluru – where most of the wastepickers reside, with the participation of 58 wastepickers and their family members. More have shown interest, many more training sessions planned.

One thought on “Encouraging Mushroom Cultivation to Counter Nutrition Insecurity”