Last year on 2nd June, in India Habitat Centre, Alliance of Indian Wastepickers organized Waste Narratives with wastepickers as panelists. Someone* in the audience asked the panelists- how does it feel to be working as an unacknowledged, invisible worker? My colleague, member of wastepickers cooperative SwaCH, Pune, in impeccable Marathi responded saying- we are not invisible, it is you who are blind to our existence. That was where we realized we need more such platforms to ensure that the given blindness is cured. Informal Workers’ Narratives is one such platform constituted under the aegis of Working People’s Charter**. 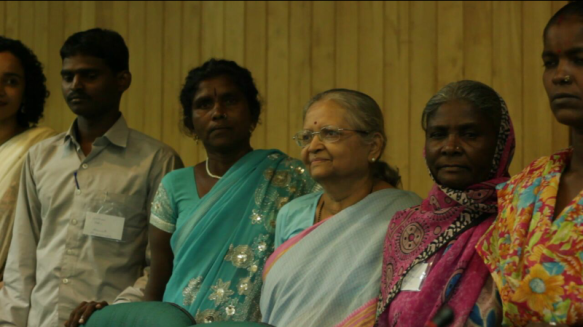 The most inspiring moment was when two-hour session went ahead in six languages- Hindi, Marathi, Oriya, Telugu, Kannada, Bangla, with simultaneous translations. That was where we learned the politics of language (a different discourse which we miss in English), articulation of workers imagination in all major languages of India and solidarities of workers coming from all over the country to put out their concerns and articulate the pride of their work. They were loud and visible.

We at Working People’s Charter want to repeat that and want to break this artificial obscurity imposed by society, we are organizing Informal Workers’ Narratives in Delhi, on 14 January in India Habitat Centre in Gulmohar Hall at 18.45 and followed by part -2, in Safdar Studio (2253E Shadi Khampur, Guru Nanak Nagar, New Ranjeet Nagar) on 19 January at 18.30.

During the Informal Workers Narratives, we will learn and unlearn our understanding of informal and informality. Informal Workers constitute more than 90 percent of our workforce. They are everywhere in mammoth numbers, yet their narratives are unheard, their imagination is invisible. There will be a panel discussion with workers from different trades, including domestic workers, e-rickshaw drivers, waste-pickers, street vendors, Hamal and other workers. The conversation with the panelist will seek to throw light on the role played by informal workers in making of our cities, and how the city continues to marginalizes them. We will be looking at the connects and disconnects between the cities and the informal livelihoods. 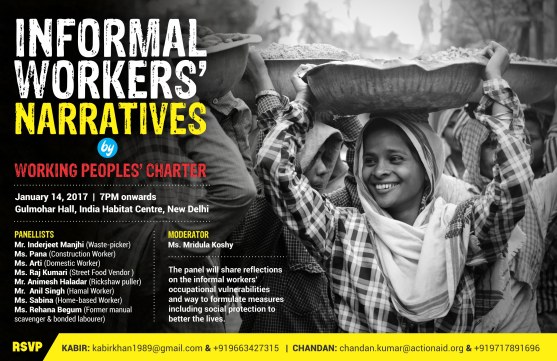 Bengaluru will have it around the beginning of February. We are looking for venues, in all major cities of India to organize this dialogue to reach out to articulate sections of society and create a listening space, where workers put out their imagination of the better world and strengthened social and livelihood protection measures. Please do participate in the events organized in Delhi and Bengaluru and help us find more places, where such events can be held. You can write to kabir.postbox@gmail.com or workerscharterprocess@gmail.com, for more the proposition of Informal Workers’ Narratives in your city.

*Members of the audience were from media, many residents welfare associations, industrialists and businessmen, and women.

**Working Peoples’ Charter. Charter is a network of informal workers organizations from all over India. Street vendors, waste-pickers, domestic workers, construction workers and many others are its constituency.