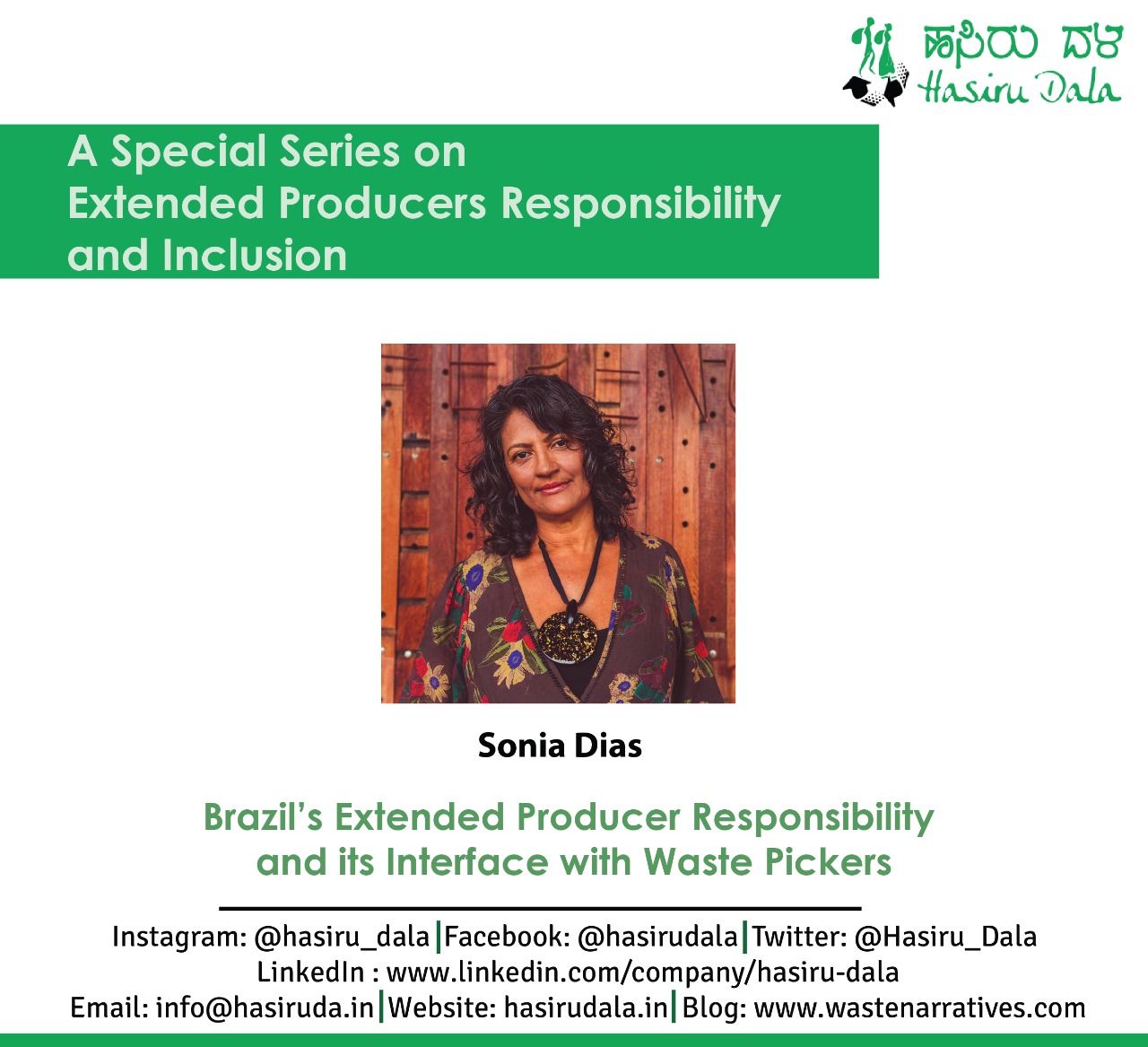 The recycling industry since its early beginning had always relied on the work carried out by informal recycling workers in Brazil, the “catadores de materiais recicláveis” (pickers of recyclables). As household waste collection falls under the responsibility of municipalities the informal sector in Brazil works primarily reclaiming recyclables either as autonomous workers or linked to cooperatives and associations.

Since the 1990s there was an increase in the number of organized waste pickers into cooperatives and/or associations and also an increase in the support these organizations received from the federal, state, and local governments especially during the period of the national mobilization promoted by the waste and citizenship forum. The creation of the National Movement of Waste Pickers of Brazil – the MNCR was an important landmark that enabled these workers to mobilize and vocalize their demands and influence policymaking. This article reviews the Brazilian extended producer responsibility program (EPR) the so-called reverse logistics system in its interface with organized waste pickers.

The Genesis and Main Features

One of the key advances in waste management in Brazil which impacts waste pickers was the approval, in 2010, of Law #12305 that instituted the National Solid Waste Management Policy (PNRS in its acronym in Portuguese). This Law represented a victory for the sanitation sector and waste pickers activists in many ways and especially for the recognition of waste pickers’ role in solid waste management (SWM). The concept of “shared responsibility” for the collection and disposal of solid wastes generated by industrial and commercial sectors was embedded in the PNRS. The PNRS contained an EPR provision, referred to as reverse logistics system (RLS) that not only recognized the role of waste picker cooperatives but also stated that corporations should integrate coops in their recycling schemes as services providers.

The concept of shared responsibility embedded in the PNRS was central to the reverse logistics system, making the generator responsible for the destination of the product after the consumption, ensuring the return of recyclables to the productive chain in ways that can increase waste pickers’ activity. According to the law, producers, retailers, importers, and distributors from tires, lubricating oils, fluorescent lamps, pesticides, batteries, electric and electronic products, and from the packaging industry need to ensure that products are disposed of safely at the end of their lifetime. For that, the law established that a system should be developed including collection, recycling, re-use or environmentally safe disposal through the establishment of industry agreements (Sector Agreements) between participants of reverse logistics systems of these prioritized areas. The other two instruments through which RLS can be established are through regulation (decrees) by the public sector and Commitment Terms.

The government delegated to the private sector the task of proposing Sector Agreements specifying how the industry should comply with the law. Therefore, on 4th July 2012, the Ministry of the Environment issued a public call for manufacturers, importers, distributors, and vendors to propose the Sector Agreements.

For the packaging industry, the proposal chosen was the one submitted by the Business Coalition (“Coalisão Empresarial”) so by November 2015 the Packaging Sector Agreement was finally signed by 20 signatories representing over 3,000 producers and manufacturers which formed the Coalition. Several intermediary groups represented these signatories for the purposes of negotiating further iterations of the agreement and carrying out various aspects of reverse logistics such as the non-profit Business Commitment for Recycling – CEMPRE, the National Institute of Non-Ferrous Scrap and Iron and Steel Processors – INESFA, the Brazilian Packaging Association – ABRE; The National Association of Waste pickers – ANCAT which is the technical arm of the National Movement of Waste Pickers coops (MNCR) amongst other organizations.

The two systems that affect waste pickers more directly is the Sector Agreement on the packaging and the Commitment Term signed for steel packaging, the latter signed in 2018 and the former in 2015.  Besides monitoring materials and packaging recuperated some of the responsibilities of the Coalition is to support waste pickers coops in increasing their productive capacity, acquisition of waste processing and sorting equipment for coops, capacity building, provision of collection containers (voluntary collection points), purchasing of recyclables from coops, and awareness campaigns. For reverse logistics systems, associations and organizations of waste pickers can prove advantageous to guarantee the supply chain in the recycling industry as these workers are involved in the collection, transportation, sorting, pre-processing and selling of materials in the value chain. Industry and municipal lead segregation at source programs are both very important to facilitate the takeback of post-consumption products through the reverse logistics channels.

Industries can implement internal segregation at source programs within their premises and also engage the population to return back post-consumer products by installing recycling containers in supermarkets and other places. Many industries have developed their own programs in which they engage with the waste pickers’ technical association ANCAT in dedicated programs to support infrastructure and subsidies for coops as part of their reverse logistics systems, such as ABIPHEC, Danone’s Novo Ciclo project, Tetrapak, ABRAPE, and others.

The design and implementation of EPR systems are very complex as it requires mastery of concepts and tools of traditional logistics management in addition to knowledge on materials management and flows, the introduction of processes for allocating different destinations to wastes produced such as reuse, recycling, remanufacturing etc. It also requires infrastructure, a trained workforce and political coordination of actors. Brazil’s EPR system – the reverse logistics – is an attempt to address the inclusivity of informal waste pickers and in doing so created avenues that have proved useful to that goal. It has been observed that one of the advances is that waste pickers coops have been supported to expand their activities, to implement quality control processes, to have access to equipment for their operations, and establish contacts with the industry.

Some of the challenges regarding the Brazilian system are worth noting. However, the National SW Policy which instituted the RLS recommended recycling as a preferential method of waste disposal in the waste hierarchy. This means that recycling is not mandatory which weakens its implementation given that the legislator did not stipulate what is the defining criteria to decide what is the most suitable waste disposal method to be adopted. This has impacts on how SW is managed both by municipalities and also by the industry. Another issue is the fact that the Sector Agreements are administrative contracts that rely on consensus building, i.e. parties are not forced to sign them. This has been pointed out by some analysts as a weakness in the RLS as it makes room for free riders. Lack of clarity in the roles of who is responsible for what in the RLS is one of the key issues as well. Several analysts point out also the fact that the process of forming the Sector Agreements did not officially include municipal governments which are at the end responsible for the implementation of municipal segregation at source systems in Brazilian cities. This has created confusion regarding who is responsible for what in waste management. Should not the industry also co-participate with the municipality in paying waste pickers for collection services given the importance of this phase in terms of enabling the redirection of materials to the industry? There is no clarity about criteria regarding payment for services to waste picker coops by the industry-leading to unbalance the negotiation power between parties. As it is now the Sector Agreements benefit organized waste pickers but leave behind unorganized waste pickers which are still the majority of workers in this sector group.

As actors are to engage in negotiations for the second phase of the packaging sector, it is important that discussions move towards resolving the inappropriate distinction between municipal segregation at source systems and reverse logistics as in the first phase of the agreement. It is up to the industry to decide what counts for RLS and what does not which affects, therefore, what the industry finds itself responsible for funding for. In the contexts where municipalities invest in segregation at source schemes with cooperatives (investing in sorting facilities, equipment etc) this means that they are subsidizing the industry some experts and municipalities claim. Resolving this is an important challenge for the next phase of the agreement.

Last year, the National Solid Waste Policy that instituted many mechanisms to support the social inclusion of waste pickers amongst them an inclusive shared responsibility system – the reverse logistics – completed 10 years since its approval. In spite of all the advancements that this policy brought about for inclusive solid waste systems one of its greatest challenges is to expand inclusivity in the reverse logistics systems with more transparency and clearer rules of remuneration of waste pickers. It is hoped that the social mobilization of waste pickers and their supporters are able to push inclusivity forward in spite of the anti-democratic nature of Brazil’s current government.

*Sonia Maria Dias is a sociologist by training and a garbologist by heart, active in the field since 1985.  She has a doctorate in Political Sciences and specialization in solid waste management. She is WIEGO’s waste specialist. She belongs to several networks and notably to Brazil’s Observatory for Inclusive Recycling (ORIS).