Historians have always been interested in cities and their resource inflows. They rarely ventured out from their comfort zones and talked about outflows. Romila Thapar’s book ‘Asoka and the Decline of the Mauryas’ sheds a lot of light on Mauryan capital. We all know that Pataliputra, the cosmopolitan capital of Mauryan Empire, was sourcing cotton from some such and such area; wood was being sourced from geographies varying from lower Himalayas to Kalinga in South. What do we know about its waste management, except the names of certain castes and social groups who were responsible for it? Same goes for Mughal era cities. Neither waste nor waste workers were fancy enough for historians to study and write about. Let us look at the books on Bangalore. Janaki Nair’s masterpiece, “The Promise of the Metropolis: Bangalore’s Twentieth Century”, “Bangalore” by Peter Colaco are all but silent about waste economy and management. Let us accept that waste has never been so interesting to be written about. City historians have been silent about its existence.

Not one of us in Hasiru Dala knew how to write, leave aside writing description of the city. We undertook the challenge. We are an association of waste workers, we want to tell the story of Bangalore, and through the waste it generates and manages. We want to tell our stories in our own way. We chose Nayandahalli as our laboratory.

How do you describe a city?  Is there are particular style to follow? Give some statistics, share some anecdotes and move on to sermons about what is wrong with the city, romanticise its elements and add some masala of ethnographic divisions. Not so sure! There are books written about cities, their past, present and future. There is no single recipe to formulate understanding of a complex creature or an ecosystem called ‘city’. Notes from Nayandahalli is our way of looking at Bangalore, – the fifth metropolitan of India, through its waste and the eyes of waste workers.

A lot has been described about Nayandahalli in our previous posts.  A lot more is to be shared.

Nayandahalli is a settlement of urban nomads, whose existence and movement is dependent on land and petroleum prices. These urban nomads are sorters, godown owners and factory wallas. I will use the term ‘recyclers’ for them in this post, as it is all encompassing. They buy waste from all over the city through scrap dealers and wastepickers. Bring it to Nayandahalli. Sort it in varying categories; transport it to factories in vicinity, where waste is processed. After processing, the waste which became raw material is forwarded to manufacturing units. They use it for producing finished products. To conclude, it is in Nayandahalli that the waste becomes a resource- raw material for booming manufacturing sector.

Why do I call recyclers urban nomads?

Recyclers are constantly on move. Their movement and existence is dependent on petroleum and land prices. Most recyclers are tenants. Very few of them own the land on which their factories or godowns are constructed or installed. The moment land prices go up; their landlords give them the notice to leave. In past many godown owners were based in Gangondanahalli and Shyamanna Garden, from there they moved to Nayandahalli. The land prices in Nayandahalli are shooting up fast, thanks to the metro rail extension to the area. The recyclers have already received the notices. They will soon be packing their bags, dismantling the structures they have installed and leave for another place. Their constant displacement makes them nomads. They are angry and want to get rid of this forced nomadness.

Akmal Baig, leader of informal association of godown owners, asks pertinent question “Why can’t government allocate us land on subsidized prices like they do for other industries and corporations to carry out our business? We want to be stationed at one place. We are happy to pay for the land in installments as we pay rent. It takes a lot of money to install a shed, and dismantling it is also an expensive affair. We are tired of moving.”

Land prices displaces them, petroleum prices hit their stomachs fiercely. Whenever petroleum prices drop, dhanda becomes manda. In the time of low petroleum prices, as it is now, manufacturing finished products with virgin raw material is cheaper than the recycled ones. Recycling units shut down. It forces many to move to other informal economy vocations. There are no guidelines suggesting industry to have certain proportion of recycled material in their products. Any such measure undertaken can stabilize the demand for recyclable material and reduce the harm caused by reduced petroleum prices.

These urban nomads face many more obstacles. We will go on highlighting all those in coming posts. But first let us learn more about these urban nomads. In past few months, we have surveyed more than 50 godown owners. The findings of the given survey are as follows: 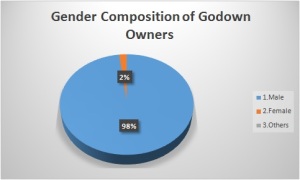 Gender: Majority of godown owners are men. But that doesn’t mean women are barred from the profession. The ownership of godown lies with the men, but their wives are also equal partners in the business. Story of Zareeena published on Waste Narratives last week reflects the same. “Nayandahalli, 25 years back was jungle. There was no electricity, water, or roads. On a vacant plot, the landlord gave us permission, and we put up a hut, as my husband found a job as a watchman. Originally from Mulbagal, Kolar, after marriage I moved to Mandya. Following a family dispute, my husband and  I moved to Bangalore. Living here, my thoughts were always on my children’s future, so I worked as an incense stick maker, but the money was hardly anything. And then tragedy stuck… somebody told us, ‘Give me your child and I will educate her’, but my heart was not at it. I went back to Mandya. My husband and one of our children came back to Bangalore and our kid got lost. Though we found her, I began questioning myself, for how long should I be dependent, and why should I give my child away to someone else. That was when I decided that I had to look for work and I joined the godown and started my career as a waste-sorter. If I worked, I would get money, if I did not I would not get any.  In my work, from glass pieces, to needles everything pricks. I often get hurt.  There is no social security, if we fall sick. As long as you’re healthy, you have work.  Worked there for 20 years, and then we decided that we need to move up the ladder and start a godown. But now we have been asked to move out, a notice has been issued by the government. And that is the story of my life…”- Zarina 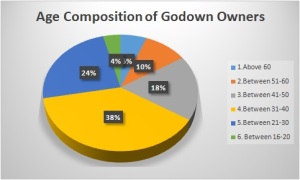 Age: India is a young nation; it is reflected in all trades and vocations. Same goes true for recyclers. 62 percent of godown owners are in the age group of 21-40 years, categorized as youth in India. It is on the shoulders of these young godown owners – green entrepreneurs, the foundations of Swachha Bharat and Make in India will stay firm. Most of the young godown owners are second generation in the business and have learned about the trade from their parents.

Religious, linguistic and Caste configurations: 80 percent (in actual numbers-40) of the godown owners have stated that they are Muslims and twenty percent said that they profess Hinduism. The higher participation of Muslims in informal waste economy highlights the national trend i.e. nationally a large number of Muslims are engaged in informal economy vocations. Within those ten godown owners who profess Hinduism, five belong to Scheduled Castes (SCs) and Schedule Tribes (STs) categories of Indian constitution and their higher participation complement nationwide trend, where both SCs and STs are higher in informal economy and informal waste economy professions. Caste trends are not very clear when it comes to Muslims. Most respondents were not sure about their caste. 22 Muslim godown owners –respondents shared that they are Sheikh, Sayyid/Syed and Pathans by caste, all of which falls in general category in Karnataka, the rest were not very clear about the caste they belonged.  Caste is not a very important identity within Muslims in Nayandahalli and Bangalore at large. This has also been pointed out in the case study on Bangalore published in the book ‘Muslims in Indian Cities: Trajectories of Marginalisation’, co-edited by Christophe Jaffrelot and Laurent Gayer. 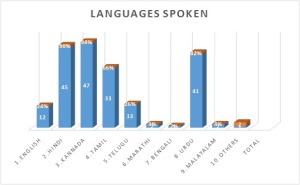 All the respondents are multilingual; 94 percent of the godown owners speak Kannada. This can be explained from the fact that 84 percent of them are native to Bangalore (born in Bangalore), other Kannada speaking respondents have migrated from nearby districts including Mandya. Second language which they speak the most is Hindi- Urdu. Other languages spoken are Tamil, Telugu, Marathi, English, Malayalam, Bangla. While moving around the area and interviewing the godown owners, one can enjoy the flavour of Dakhani, a derivative of medieval languages Rekhta, Dehlvi and contemporary Urdu in Karnataka, Andhra Pradesh and Telangana…Tum kya karta ji, apna godown samne icch to hai…

Godowns like Bangalore or any other city in India are melting pots of languages and identities. There are more Muslims than Hindus. Caste patterns within Hindus are partially clear where as with Muslims it is still very confusing. The coming posts will have more anecdotes, stories and some more statistics about urban nomads.

The post here is a part of the Notes from Nayandahalli series and is a reflection of an ongoing study supported by Indian Institute for Human Settlements and WIPRO Cares. You can find the previous posts here… Post 1, Post 2 and Post 3. The survey  is ongoing and is being conducted by Malleswari Baddela and R. Usha.