A huge loss in his pressure cooker manufacturing factory and the financial crisis that followed made Ajay a migrant, or footloose informal worker. Eight years ago, he moved from Delhi to Bangalore. Having to start life from scratch, he became a waste picker. Bangalore offered him the veil of anonymity from his past. After a few years in the profession, he met a Hasiru Dala activist and became associated with the organization. 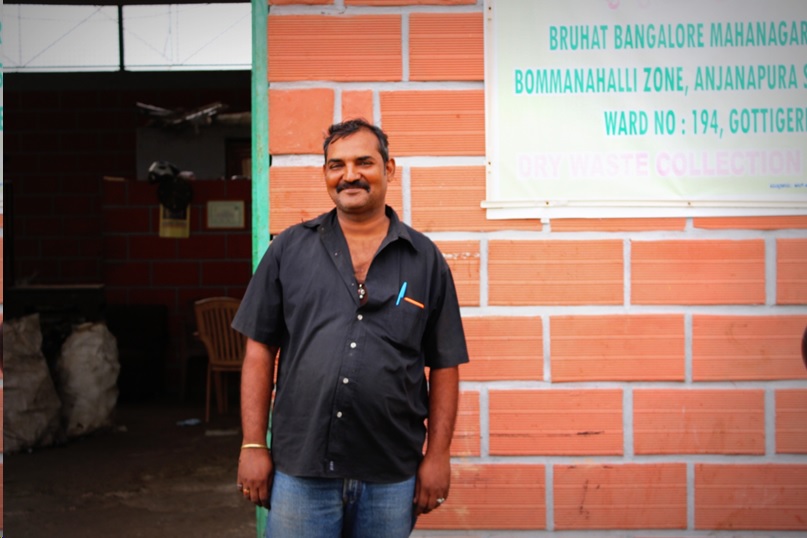 Recognizing his potential in running a micro-enterprise, organization offered him to operate one of the 33 Dry Waste Collected Centers (DWCC), located in Gottigere, installed by Municipal Corporation of Bangalore (Bruhat Bengaluru Mahanagara Pallike) and managed by Hasiru Dala.

Today, Ajay runs one of the most successful Dry Waste Collection Centres in the city. It segregates over 1-ton dry waste every day/32 tons a month, in over 15 different categories ranging from milk packets, glass bottles, newspapers to hard and light plastic. Using the capacity of a DWCC to the fullest. With very little knowledge of Kannada, he still was able to coordinate with officials in Municipal Corporation, sanitary workers and wastepickers.

What makes him tick in this business? we asked. “You have to recognize that there is money in this business. I make myself available and accessible at all times. Me and my staff live near the premise of the DWCC and are able to attend to it when the situation demands.”

His three daughters go to school. Two of them study in a hostel and he visits them every other weekend with his wife. His youngest daughter recently joined a private school.  He says he feels happy and settled in Bangalore.And his three daughters are very much fluent in Kannada.

Ajay recently bought a bike and he loves to drive around.