Buguri (‘Spinning top’ in Kannada) is a community library for the children of the waste-pickers currently in 4 locations in Karnataka- Banashankari and Hebbal in Bangalore, Mysore and Tumkur. Buguri is a Hasiru Dala initiative, a waste-pickers organisation based out of Bangalore. Buguri runs with a primary aim to work with the children in the age group of 6 to 16 years, of the waster pickers’ community with the help of books. The idea is to introduce a no-fee and a fun library space to open them up to the magic of books and explore the empowerment it gives to young and fresh minds.

The Buguri library at Mysore was set up in October 2017 in a waste pickers’ colony, whose traditional occupation was to collect fallen, in B.M.C.Nagara, Mettagali. Chaitra and Mangala who run the library space had over the months observed some gender biases within the children and were on the lookout for addressing it through conversations. They had noticed that the children had begun to point at illustrations in the books, which they thought of as inappropriate, and would pass them around with everyone giggling. Soon the boys had begun to address each other as girls, giving them female names as if it were an offence. The older boys had also begun to dominate the group and present themselves in a position of power with the girls being very shy to speak out. This on one hand, the girls also had to deal with the hush-hush around menstrual health and hygiene. They felt that the children learn from such behaviour and not accept them as normal. 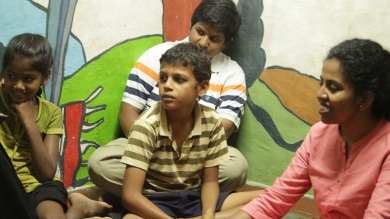 With all these in the background, Buguri decided to invite Jasmine of Hidden Pockets Collective for a Gender Sensitisation workshop at the library in Mysore.  Hidden Pockets Collective conducts research on sexual and reproductive health in cities of Global South. It has been working on curating services related to sexual and reproductive health in 7 cities of India. It primarily focuses on health services used by young people, people from LGBTIQ groups and any other groups who would be looking for some correct information. It also conducts a series of workshops with different groups – schools and colleges on gender sensitisation and making theses space diverse and inclusive.

After an initial talk between Buguri library, Mysore and Hidden Pockets Collective and a bit of a logistical back and forth, Sunday, June 17th was picked.

Our day began as early as 5:30 am on a Sunday when Charu picked us- Jasmine, Kiran and Aruna up. Jasmine had earlier insisted that we bring Kiran along since the presence of a man changes the way young boys listen and respond to a session, especially facilitated by women. I have learnt this to be true myself.

We landed up in Mysore where Chaitra and Mangala guided us into the community where Buguri is situated. The amount of space there for children amazed an urban space person like me which allowed me to look more into how spaces and behaviors, especially of children are so intertwined. Buguri Mysore is a tiny space and decorated very beautifully with art works made by the children. The atmosphere felt extremely warm and inviting.

There were about 15 children in the age group of 9-16 years and their curious younger siblings peeping from the window, who were ready for the workshop to begin. They were clearly prepared earlier for the session, seeming very eager and some, having skipped their breakfast. The 4 of us had squeezed ourselves between the children along with Chaitra and Mangala. Jasmine had already begun asking their names and it amazed me how in 10 minutes she had managed to remember most of them! She was also asking them who their favourite actors and actresses were, later corrected by the children to ‘heroin’. At this point is when I realised that the session had already begun. Seemingly effortless and quietly warming up the children. The idea seemed to get the children to speak. The following questions were about make-up, what makes an actor ‘average’, beauty parlors, bullying and love. The role of gender and the opinions of the boys and girls were addressed subtly and with very minimal judgement. Jasmine was also careful not to ‘correct’ what politically may seem as ‘wrong’ answers. 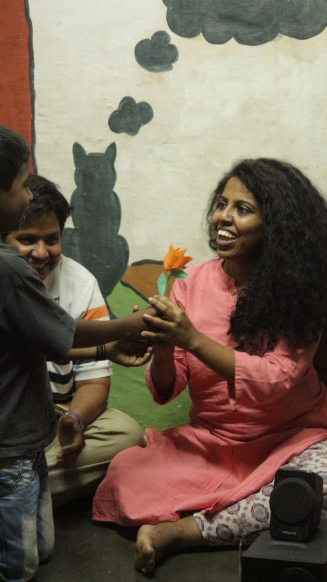 The girls seemed to share very similar ideologies on these topics bordering feminism. Their responses and standpoints being very mature for their age.  While the boys, had very mixed responses from- girls as bullies cannot be given a second chance, boys can be; boys should say no to dowry; boys don’t wear make-up because they aren’t girls. And interestingly, there were moments of exchange between the boys who answered differently trying to get one to see the other’s point of view. It was an interactive session. These discussions were combined with the playing of 2 podcasts made by Hidden Pockets followed by a discussion of the same. One podcast was on bullying in a school discussed between two friends that was later escalated to the faculty who handled it in the school assembly without outing the bully. The discussion followed with the children stating how important it is to address an issue in a more general sense in a school space rather than picking out the child at fault resulting in their embarrassment. The second podcast was on growing up through an introduction to menstruation explained by a mother to her daughter with the growth of a tree as a metaphor. It also addressed changes in the body of teenagers and reassuring that changes are normal. The children reacted by discussing how some of them and their older siblings now have pimples.

This on one hand, with the verbally strong, there were some children who were very shy. Jasmine opened out to them an option of writing down their thoughts and queries without a need to mention their names. This was more than welcome in the group.

This time they took to write also meant that some would sneak out for a quick snack!

Soon after, Chaitra began to read the questions and I was wondering what this session had spiraled out into. The answers would mean another session! The children were eager to know more on a range of subjects- child marriage, menstruation, friendships and medical help. Jasmine patiently responded to them all also keeping in mind to be sensitive while addressing the group as some content may not be suitable for the 9-10-year old in the group, to be spoken explicitly.

We ended the workshop very warmly with Chaitra and Mangala handing us crepe paper flowers made by the children with their name tags on. As like one child said “Preeti manassinda barbeku” (“Love should come from the heart”), we left with hungry tummies and love in our hearts.